It’s taken me this long to achieve perspective on how I felt after that last procedure.  Great timing, with this being Halloween week.

Hop on board the crazy train, won’t you?  I’ll take you to a dark, scary, verbose, self-absorbed, shallow place.

Now, the doctor had warned me at the consultation there would be bruising.  But having never been in a fight, I didn’t quite know what to expect.  And I guess I expected the bruising to show up gradually, not instantaneously.

Secondly, I didn’t even know I had all those spider veins.  I’d noticed a couple.  I lost count of how many times the laser was on my face, so when I looked in the mirror I was shocked at the extent of the treatment on the cheeks.

I spent the rest of that day in shock.  Everything felt raw, particularly the birthmark treatment.  And heat seemed to come off every part of my lasered skin.  The ice pack they gave me felt soooo good, yet melted much too quickly, as did subsequent ice.

Right after the appointment I had some time at home to try to use make-up before I picked up Boychild from preschool.  I had high hopes for my Jane Iredale stuff, because the BB Cream fully covered my pre-procedure birthmark.

It didn’t work.  The stuff was smeary, and it just kept MOVING.  I touched up, powdered, re-applied, tried to smooth over, and BLAH!  Purple appeared again.  It was like trying to mix a beige paint color and having someone randomly throw purple at the palette over and over.  So I couldn’t use powder; I had to set the make up just right and then FOR GOD’S SAKE NOT TOUCH IT AT ALL!  Which left me with a very fake looking, shiny face.  Only made worse by the fact that my BB cream is for my WINTER face, witches, and I was currently on my summer face, or at least injured pink/purple face (i.e., the shade of the BB Cream was called something like Hemovore).

Once the make-up was set perfectly…now how to ice it and not disturb the liquid mask??  Make-up was everywhere.  My face still looked screwed up and scary.

Luckily preschool pick-up is drive-up at the door so I only had to explain myself to the teachers.  Boychild, however, looked at me and instantly said, “You don’t look like yourself, Mama.”  I told him it was temporary. Fingers crossed.

I got a friend’s help in picking up Girlchild at the door of her school later and bringing her to the car, so as to hide from the light.  The friend tried not to react, but her eyes were like saucers.  (I took no offense; have you ever seen a horror movie in which the protagonist runs into a ghoul and says, “Oh!  There you are!” with a nonchalant glance?).   Girlchild was very sweet and said fearlessly, “Hi Mama!  You look good for Halloween at least!”

I got a hug from Mr. Banks later (and a few pats on the back over the next week or so).  Both he and Boychild claimed that they “didn’t want to hurt me” as they revolted away from my face when I got too close.

The next morning, as the dermatology office had implied, was worse in terms of how I looked.  My whole face was swollen.  I had instant jowls.  My eyes were swollen so much beneath my lower eyelids that when I inserted my contact lenses my finger left an indentation in my skin there for minutes after.  But I was afraid to wear my glasses another day because the frames would be resting on the inflammation, and I couldn’t imagine that was a good idea.  Maneuvering my contacts in was so hard—like a really really fat person washing their belly button, I must imagine.  My cheeks were swollen and raised so much that I felt like I was constantly smiling, but when I really did smile (rarely) I could barely see.  Ice helped with the inflammation for a few minutes, but didn’t last long.

And that was it; from then on I just hid. I wore my hair down over the next few days and used scarves and hoodies (not together) to cover everything I could.  Luckily the weather was feeling my mood and did its best to be cold, dark and rainy.  The only time I went out was to go to a movie with Mr. Banks to see Rush, and at a dinner cinema so I could eat within the dark shadows of the theater.   That night was my absolute worst day for swelling, and I looked like a monster, or Michael Jackson on a really crazy day, in civilian clothing.  I kept my head down when in line, and tried not to make eye contact with anyone, mumbling responses without eye contact if necessary.  I was a bruised, Breakfast Club Ally Sheedy.  The fact that someone in permanent crutches passed right in front of me in line, and that the movie was partially about an F1 driver who suffers life-threatening burns due to a wreck, and goes right on driving with disregard to how shocking his face looks….well, I get that you were attempting to offer me perspective, God, but I still felt very sorry for myself.

2 Days After, with my Michael Jackson makeover proof

My feelings of self-pity, sadness, and frustration over the next few days steadily gave way to feelings of anger.  I hated the way I looked, and just became surly and grouchy, and lifeless.  I wasn’t angry at the dermatologist; I do wish they’d been very specific about what I might look like, but they never lied to me.  And I didn’t think they did a bad job.  I just didn’t know how to cope.

I didn’t want to try to explain my face to anyone, because the spider vein part felt vain and I was embarrassed.  And how do you explain this kind of thing to people who you pass for an instant?  You don’t.

So I kept hid, and became more antisocial each day.  And each day felt like an eternity.  And I slowly became…..The Beast.

The Beast is not talkative, excepting complaints.  The Beast doesn’t try to hug anyone in its house, for fear of scaring them.  The Beast is friendly enough to its own spawn, playing a bit, and feeling thankful for them, but The Beast’s preference is to huddle over its laptop and become increasingly asocial.  The Beast wants to hate and be unhappy!  Grrrrr!  The Beast wants to decorate the outside of the house for Halloween, but shrinks its face away from the sidewalk as friendly families walk their dogs and try to have a chat.  The Beast wishes it had a massive cloak.  The Beast prefers not to exercise ever again.  Or diet.  Why bother?  In fact, The Beast quickly resorts to neverending inhalation of junk food, and comfortably exists for 2+ days in pajamas without a shower.  The Beast doesn’t want to feed its family.  The Beast takes the mind of a teenager and often quips things like “Whatever” and “Who cares?!”

Let me tell you, friends, a mind left alone can become a scary place.  I got stuck in myself, overanalyzing everything.   I believe there is such a thing as too much introspection, introversion and isolation.  I believe this because I was there.

I have not felt so self-conscious since high school (for whatever reasons teens feel self-conscious:  pimples?  Unreturned crushes?  Lack of perfection?).  I was certain that everyone everywhere was staring at me, in my rare public appearances.  I don’t miss feelings like this.  We’d all like to think we left them at high school graduation, right?  Now I’m not so sure.

It’s a scary thought.  But for over a week I became it. 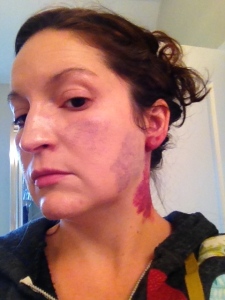 The more time I spent by myself in self-pity, the worse I felt about myself, because I realized what a ridiculous feeling self-pity is in times like these.  Why wouldn’t God answer my prayers to make my face back to normal?  Oh I’ll tell you why.  BECAUSE IT’S A STUPID REQUEST.  I mean, what if I’d been burnt severely and suffered permanent scars?  What if I’d been born deformed, or one of my kids had? The more I felt sorry for myself, the more I hated myself and felt shame for being vain.

But admit it, we’re all vain, and at one time or another we’ll probably turn into Beasts of our own, or we already have in our teen years.  Vanity is a sick, selfish, immature emotion, not unlike jealousy.  You can’t deny that these emotions exist, yet they’re unbearable to accept or embrace. Shouldn’t we all be “above” worrying about looking good?  Shouldn’t we deny that aesthetics are a big part of the enjoyment of life?

And in admitting my vanity, I also was admitting my lack of superiority.  No longer was I a better person than some idiot on MTV who had plastic surgery to replace 50% of her body, or moved her buttock fat to her lips or donated it to a man’s calves.  Nope, now we could be pals.   I was no longer deep thinking, or smart in any way, or a person who valued values, thoughts, or logic more than the cover of Us magazine.  I’d been reduced to the lowest human fundamentals.  Such are the thoughts of The Beast.

Sometimes I’d sort of forget about my worries and smile, but soon enough I’d pass a mirror and REMEMBER how scary I looked.  And then I’d just get instantly angry again.

The worst was the disappointment of every morning—hoping the bruising would be all gone maybe?  Please? And then the mirror:  basically no progress, or maybe 10% improvement.

One morning I awoke and said to Mr. Banks with a long sigh, “I dreamt that it was gone off my face.”

“I did too,” he said, in all seriousness.

Eventually The Beast’s face began to heal…probably after about 10 days of hideous, Girlchild told me, “Your face just kinda looks now like you got pizza on it.  It’s getting better.”  That’s right, peeps.  Smooth-faced Freddy Krueger had become an improvement. 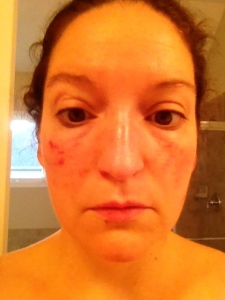 And then…each day, finally, it began to fade.  Until I could see the progress. 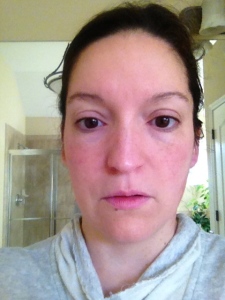 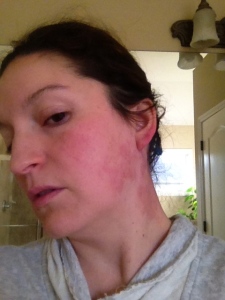 The birthmark is lighter than before, the veins are mostly gone, and the spider veins are a bit improved.  I suppose I’ll finish up the work that was started—but I think I’ll wait until after the holidays to resume any of the cheek/eye area stuff.  No one wants a Beast around at Christmastime.  It’s a pretty big bummer.

Care to comment?:  Have you ever been confronted with your own vanity?  How did it feel?

3 Responses to “The Slippery Slope Pt 3: Vanity and the Beast”