I went to Dr. Laser All the Bad Away’s office with shaky hands and an open mind.

These are my terrible “Before” selfies, taken in near-dark early school morning conditions.  (I’m thinking of starting a photography blog…KIDDING) 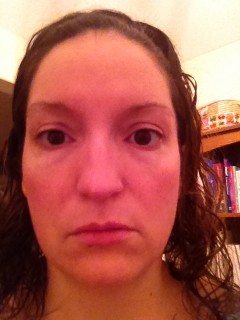 Without makeup, prior to the procedure. Note the rosy cheeks…..Spider veins. Where are you comin’ from. Spider veins. I don’t even know what you are.

Pre-procedure close-up of birthmark, near my left ear

I would visit with 3 lasers:  Yag, V-Beam and KTP, (though I don’t know which one was used for which area).

Laser 1:  Getting rid of the eye veins.

I had thick plastic Band-Aid-y shields stuck on my eyes.  After successfully testing a spot behind my ear, Dr. Lasers pulled my eye veiny skin down toward bone, and zapped.  Then he hesitated.  Apparently he saw a spark.  That’s not supposed to happen.  Off to a great start, my doubting and fearful voice said.

“Do you have makeup on?”

Seriously.  Do I look like it?  And who on earth wears makeup to an appointment to cover up flaws they’re paying to zap?? “No, not even lotion, I just used facial wash and a facial scrub this morning.”

He cleaned the surface a second time with alcohol and tried again.  I think he ended up turning down the laser because he was worried about making my skin blister.  I think, however, what happened was that some of the previous day’s make-up remained, and since it’s mineral-based it caused problems?  I don’t know.

(Nothing makes me feel smarter than realizing I’m in the middle of a situation that I don’t know much about.  I cursed myself internally for having not asked more questions.)

“Okay, I thought I could get away with not having to use the eye shield, but some of this vein I’m not able to pull down to the [ocular?] bone, so we’re going to have to numb your eyes with drops and use the shield.”

I breathed.  The metal shield, to which I referred in Part 1 as a “shiv”, was a small tool with an end that looked like part of a shoehorn.  It was put directly on my eyeball and held by the assistant as the vein was zapped around it.

Each laser zap felt like a wet sting that ended with a burning sensation.  Apparently a cooling liquid touched my face split seconds before the blast of super hot light scared the veins away beneath my skin.  Then another cooling liquid followed in another split second.  The first zap felt weird; the second kind of ouchy/burn-y, and once all the eye vein zapping was done I felt like someone had snapped a wet rubber band all around the bottom of my eyes about 30+ times.  They let me look in a mirror and I have to say, I was pleased…the veins seemed gone, and there was no bruising, and only mild swelling.

While I was relieved it was over (who likes anyone messing with their eyes?), I felt pleased and I was happy with the care and caution Dr. Lasers seemed to use.  He took his time and quietly concentrated.

While my port wine stain (“ZinSplash”) is less noticeable than many others I’ve seen online, I wanted it removed because of the complications that may arise as I age (such as spontaneous bleeding following minor trauma; see Vascular Birthmarks Foundation.  Dr. Lasers put me in goggles, tested this laser behind my ear again, and then went to town on ZinSplash.

I’ve heard that the placement of tattoos has a big impact on the pain associated with getting inked, and now I may understand.  Parts of my neck only stung a little, others were very painful, like getting a skinned knee on my neck repetitively.  That sounds ridiculous, I know, because one skinned knee is no biggie.  But try like 100 skinned knees, peeps.  You would cry like a tot.

The sheer size of my birthmark meant a crazy number of zaps, and probably halfway through I told Dr. Lasers, “I need a break, to breathe.”   The other oogy thing was that my birthmark covers the front and back of my earlobe, so at certain points the echoing volume of the laser near my ear canal was really weirding me out.  I tried to go to my happy place.  I don’t even know where my happy place is anymore.  It may have been ravaged by tornadoes or something.  Stupid climate change.

When it was done, I felt a little worn out.  Dr. Lasers went straight to Laser 3.

Did I mention that while using this laser he was trying to carry a conversation with me?  About travel?  Dentists are not alone in their desperate need for social interaction while on the job.

I think Laser 3 was actually just Laser 2 with its energy turned down, but I couldn’t be sure.

This laser set about erasing the ruddy spider veins from my cheeks.  [Important side note:  these never bothered me a ton.  I’d started covering them up with make-up, just to even out skin tone, but in a way I’d thought they were kind of a natural cure for the wan color of my face.  Removing these was the one action for which I signed up that inflicted me with a guilty sense of vanity and greed].

The treatment started out okay, but the closer to the bridge of my nose the laser got, the more it hurt (hello, bone!).  By the end of this procedure I was fairly miserable and had to slowly unclench and relax every single muscle in my body. When the goggles were removed, I was surprised that I needed to ask the assistant for a tissue to wipe away a couple of tears that had welled up.

“Do you want a mirror?”  Dr. Lasers asked.  As I said yes, he went to grab one and cautioned me that he’d been pretty aggressive with this laser.  I thought, “Cool!  Maybe fewer treatments?”

I was handed the mirror.  I gasped loudly.  I’m not dramatic.  I don’t gasp often.  Had there been THAT many spider veins on my cheeks??

At that point Dr. Lasers nearly ran out of the room as he said, “I told you there’d be bruising.  But sometimes you don’t know what to expect.”  Bruising?  As the Eskimo have like 1 billion words for the many different types of snow, so should the dermatologist’s office have at least 10 specific variations of the term “bruise.”

I was given ice.  I was led to empty areas, either to avoid scaring away other patients, or to save my pride.  I was thankful.  I paid for my portion of the appointment, and made my next appointment, still in shock.

“Can I wear contacts now?  Makeup?”  I asked the woman who handles laser questions and payments.

“Makeup, sure.  I’d wait on contacts for a day or two; there’ll most likely be some swelling.”

I slithered out of the office; looked at my reflection in my car a moment, tried to be strong inside, and took back roads home to avoid eye contact with strangers (and consequently major traffic incidents).  I felt like a vampire when the sun hit my lasered spots, particularly my neck.  I wanted to shy from the sun because I felt like I’d gotten sunburn on Mars.

Here is what I looked like right after the procedure:

Post-procedure, less than an hour after procedure 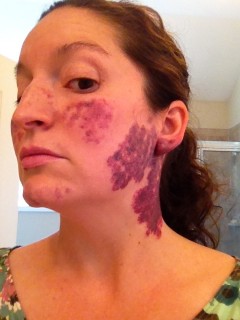 Other side, <1 hour post-procedure

I was told to ice 10 minutes at a time, but given the size of my “bruises”, this would mean icing all stinkin’ day, which I was not prepared to do.  I did my best, but slowly my cheeks swelled so much that they looked like the female creature from Avatar.

A friend asked me if I’d do it again and I didn’t know what to say.  “Give me time to see how it heals, “ I said, “But right now, I’d say eye veins, yes; spider veins…I’d only recommend it to someone if they marked all the flaws they’d like gone with a dark purple marker, and if they walked around like that for hours/days; and if they snapped a sensitive part of their arm with a wet rubber band about 50-100 times and decided that wouldn’t feel so bad on their face.”

9 Responses to “The Slippery Slope Pt 2: Maybe Not So Slippery”