I am in the garden pruning, harvesting, weeding…and there is one of my bunnies, full grown, munching on a giant juicy tomato.  Really, I feel as though I have raised him as my own.  Okay, not at all true, but I did show him mercy and spare his life.

Yet it is time for him to leave.

I chase.  He runs.  This continues.  He runs to his way out through the gate slats, but I’ve added more reinforcement today, and he bonks his head on chicken wire and runs faster in another direction.  Somehow I have to get him through the open gate area, and then lock it behind him.

Eventually Mr. Banks gets involved and between the two of us…that’s right, two adult humans…we get the little bastard out of there.

Gate closed and locked.  Rabbits out forever.  Really.  Rabbits are not the boss of me, I swear.  McGregor wins.  Really.

My garden has been built!  Two raised beds for organic veggies and herbs, a spot to sit, and plenty of area for the kids to have fun. Perfection.

I am super confident that the fencing and entrance gate will keep out vermin thieves AND Dogchild (who would just pee on all that perfect produce and ruin it).  I’ve put a lot of strategy into this.

While I am enjoying the London Summer Olympics on TV, there appear to be rabbits outside training for their own event.  As I chase them from the garden (how did they get in there?!), one pole vaults himself over the 2 foot fencing, unharmed.  Grrrr.

I hate rabbits now.   I don’t care how cute their little faces are.  I make the fence harder to sneak through.  Gonna make it all Fort Knox up in here.  Also sprinkle blood meal and rabbit repellent.

Wish Dogchild chased them from the yard like normal dogs do.  He seems to want to coexist. 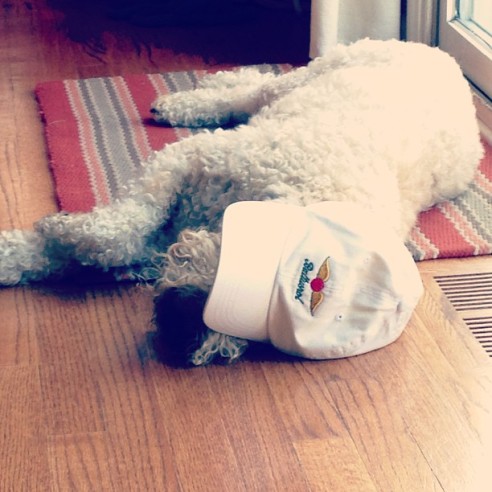 This guy: not helpful.

Time to plan this year’s garden.  Garlic I guess is doing fine, not seeing much yet…wait, why is that straw in disarray?  Ugh, Boychild was probably out here trying to dig in the dirt again.

Took a friend on a tour of the garden today.  She wanted to catch a peek at the tiny praying mantises we released a couple of weeks ago.  Embarrassed that already I had some 2 foot tall weeds near the garlic, I begin to pull them on the spot.

Friend:  Where you pulled that weed?  The ground is moving underneath.

Me [not looking yet]:  Oh!  Wow, maybe there is mantis movement!

Friend:  How big were those mantises again?

Then I look.  There is a….heartbeat below the earth.  What. The. What.

Wearing gloves and wielding a spade, I begin to slowly dig, while my friend backs way up.  Under some straw….gray messes of some kind of hair.  Noooooo…..

I dig gently a bit more, and I see: 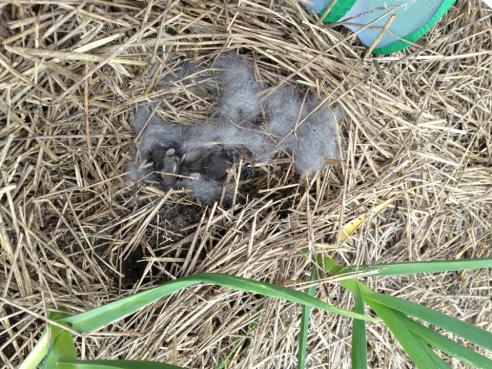 Near Garlic! That makes sense.

Tiny teeny bunnies with eyes shut, practicing jumping in their sleep.  About 6 of them.  I know they are not mice because their ears are a little disproportionate to their bodies.

Are.  You.  Kidding.  Me?  Rabbits are not supposed to like garlic!  And yet they snuck in here and made a nest at the base of the garlic bulbs!!

Mr. Banks, in a moment of machismo, offers eagerly to “take care of them.” [Side note:  Mr. Banks, to my knowledge, is not mafia.]

“No!”  I shout.  “Look, I know they are jerks, but I can’t harm a nest of babies!  Just because I’ve started eating bacon doesn’t mean I’m ok with just killing animals all willy nilly!”

I’m not happy with this serious security breach, but I cannot hurt them.  I also don’t want them to have my smell on them, because what if their momma doesn’t return?  I google the situation and find out:

2)   Momma rabbits nurse once daily for like 5 minutes.  (That explains the rabbit population.  Can you imagine that minimal investment in your spawn??)  Yet, if nests are abandoned at this stage, they die.  With closed eyes, obviously they are too young to forage for their own food.

3)   According to a local wildlife rescue center, it is illegal to move a bunny nest.  I can’t even just escort them down to the forest preserve nearby?  Nope.  Rescue center will also not accept bunny nests unless I can say with 100% certainty that the momma is not coming back, and I’m getting the impression they still might tell me no….it’s best to leave everything as is for the babies’ survival.

I really do not want dead bunnies buried in my garden.  It’s not good for emotions, or this business of turning the kids onto nature and gardening.  “Hey, guess what?!  Our garden grew dead bunnies!”  It’s in my best interest to ensure the momma keeps returning.

She does, and I don’t know what the hell she’s eating because she is surprisingly leaving all the lettuce and carrots alone.  Is she some kind of rockbiter?  Nature is all weird.

Every once in awhile I check on “my” bunnies.  Oh, the irony!  What would Farmer McGregor do?  Would he have made a bunny pie long ago?  Did he have a heart, a big soggy one like I apparently do?  I am at once proud of, and disgusted with, myself.  I’m creating my own future problems here like a drama queen.

One day I check on my nest and one more-developed bunny hops out.  Crap!  I chase him with the soft bug catcher thing the kids have, corner him and scoop him with it without touching him, and escort him back to his nest.  But when I peel back the straw to insert him underground, his sibling jumps out and runs!  Dammit, these rabbits are making a mockery of my sympathies!! 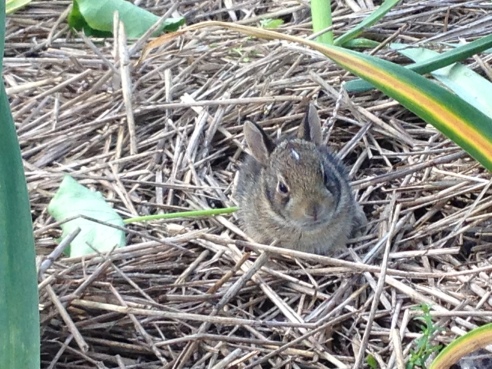 Meanwhile, the rabbits have somehow eaten 2 new trees to the point of destruction, as well as my liatris, coneflower/echinacea (great, now they have extra SuperBunny immunity!), crocuses, scyllas, and snowball hydrangeas.  Basically these rabbits are removing all color from the backyard and garden, doing a little reversal of the color scene when Dorothy lands in Oz.  And that’s why my vegetables are still intact; they’re eating everything else.

Bunnies have abandoned nest, but they still consider my garden their home, and return for frequent visits.  Since they’re familiar with me, they act rather tame and are prone to sitting and staring me down while tumbleweeds blow past our standoff.  One may have been wearing a cowboy hat the other day.  And spurs.

I order rabbit repellent concoctions online.  The one called “Shotgun” is a joke because it’s mostly dried garlic and I think we’ve determined that does not work.  (Mr. Banks offers a “different shotgun.”  Who are you, Mr. Banks?!??!  The Nuge??)

So I try liquid stuff, “Repel All”, with a pic of all Noah’s critters on the front.  Amazon reviews are amazing.  The bottle arrives shrink wrapped.

……The photos on the packaging should also show a human. The morning I decide to use it I am hungover from wine, and have taken my probiotics on an empty stomach.  I cut open the shrink wrap and immediately smell it (a blend of rotten eggs, garlic and some bobcat urine or something?).   I gag and flies surround me.  It smells like rot and garlic, sweet and pungent, and vomity and urine-y.  It looks like mucus-y sticky thick puke on the ground.  It actually has froth.  Oh, God.  I try not to lurch.

Later, after a shower and fresh clothes, no matter what I eat, it smells the same.  I feel like the smell is in my skin even though it never touched me.  Thanks to my work repelling rabbits, I may never be able to eat again.

Now I harvest garlic, have some in the fridge and some in the basement and it’s that same sweet similar garlic smell as Repel All, somehow, and it’s awful, everywhere.  Everything is like the jug of Rotten Rabbit Juice.  I used to love garlic.  Only Saltines sound good right now.

Have not seen rabbits in unauthorized areas.  Hmm, maybe that stuff works.  Well, I mean, if it DIDN’T, that would mean that the rabbits are somewhere in a factory making that awful jug of shizzle to trick us humans into vomiting, right?  And there’s no way they’re that tricky.  Nuh-uh.  Nope. 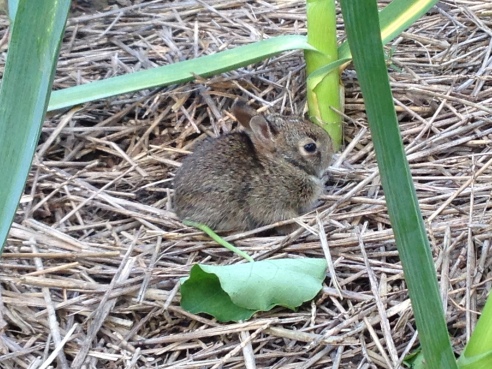 To participate with me in this week’s Writing Challenge, click here.

2 Responses to “Diary Excerpts From a Conflicted Farmer McGregor”